Paralyzed by a motorcycle accident at 18, a Wells Fargo team member turned to wheelchair basketball to get back on the court.

The country road beckoned on a glorious July day that brought out coolers and flip flops and, in Travis Smith’s case, his motorcycle.

Heading into a curve, Travis took a quick look over his left shoulder to find his riding mate — a glance just long enough to cause him to lose his balance and run off the road, flipping his bike.

The accident paralyzed him from the chest down, less than a month after his graduation from West Bladen High School in White Oak, North Carolina.

“Everything changed for me in that instant,” Travis says, “but I decided it wasn’t going to affect who I was as a person, or what I would achieve in life. And so I just pushed through it and found a way to still do the things I loved to do.”

For Travis, an avid sports fan who’s now a trust administrator at Wells Fargo, that meant finding a way to keep shooting hoops.

His success at getting back in the game was on display March 6-7 when he suited up with the Triad Trackers at the Gateway YWCA in Winston-Salem, North Carolina, to compete in the Carolina Conference tournament of the National Wheelchair Basketball Association.

The team went 3-2 in tournament play to finish seventh among 10 teams from Georgia, North Carolina, and South Carolina, improving on its 1-4 finish in 2014.

“I’ve coached Travis and his Triad Trackers teammates for two years, and these guys inspire me every day with their ‘get it done’ attitude and willingness to help each other,” says Brian Robinson, whose full-time job is coaching the nine-time state champion girls basketball team at Bishop McGuinness High School. “We’ve improved upon our record in 2014 and continue to work hard.”

Travis describes wheelchair basketball as a “mixture of basketball and football” because of the equipment and contact.

The sport is played in special wheelchairs whose wheels are tilted at 45-degree angles for speed and maneuverability. Additional wheels in front and back offer stability, and tubular frames provide protection as players battle for position.

The game and its rules are much like “standing” basketball with a few exceptions: Players must dribble at least once for every two turns of the wheels to avoid being called for traveling; a charge is called for hard contact of one player’s wheelchair against another’s; and a player can get a technical foul for grabbing another player’s chair.

Travis learned about wheelchair basketball during his rehabilitation at Shepherd Center in Atlanta following his injury. A therapist connected him with the Fayetteville Flyers team, which he played for before enrolling at Campbell University in 2009.

With 191 teams, 22 conferences, and six divisions in the National Wheelchair Basketball Association for men’s, women’s, intercollegiate, and youth teams, Travis says wheelchair basketball is one of the easiest adaptive sports to play.

He loves the game’s competition, comradery, and strategy.

“Wheelchair basketball is a really competitive but very fundamental game at its core,” Travis says. “It’s primarily about picks and rolls. If you set a good pick, you get an open shot nearly every time, because the wheelchair is in everybody’s way.” 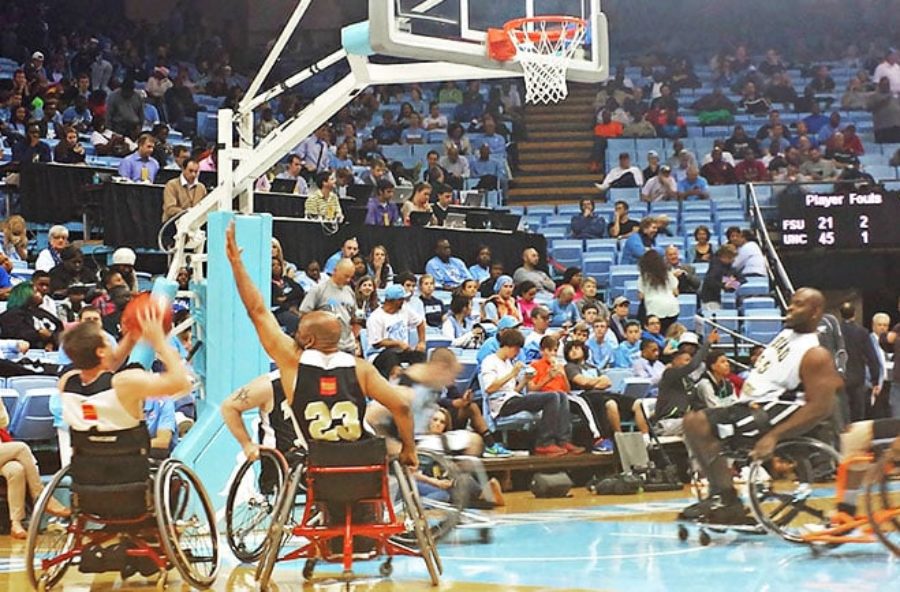 A motorcycle accident after high school meant Travis Smith’s next stop was Shepherd Center rehabilitation hospital in Atlanta instead of Campbell University in Buies Creek, North Carolina.
When he graduated from Campbell in 2012, Travis joined Wells Fargo Wealth Management’s North Carolina Trust Center in Winston-Salem.
Travis (third from left) first learned about the wheelchair basketball team while an intern at Wells Fargo. Brian Robinson coaches the squad, which includes Daniel Moody (No. 13), Tamirat Ives-Rublee, Wayne Davis, Mike Lambourne, Tim Rankin, and Roy Wilkins.
Travis hustles back on defense during the Trackers’ victory against Spartanburg March 6, 2015.
Wayne Davis shoots a free throw. Like Travis, he was injured on a motorcycle.
Travis, who says his passion for mentoring is even stronger than his love of sports, talks to Welton Locklear of the All Heart Tornadoes team from Pembroke, North Carolina.
Travis takes a shot in the Dean E. Smith Student Activities Center in Chapel Hill. The team played during halftime at a University of North Carolina game in October 2014.
Travis also plays sled hockey for the team sponsored by the Carolina Hurricanes of the NHL. The team won its division championship.
At Wells Fargo, Travis is a trust administrator on a team that manages life insurance policies in estate plans.

He first learned about the Triad Trackers in 2011 during a summer internship at Wells Fargo Wealth Management’s North Carolina Trust Center. Hired in 2012 by Wells Fargo, Travis contacted the Trackers and soon became a regular.

It didn’t take long for news about the team, or the threadbare state of its uniforms, to spread among Travis’s Wells Fargo teammates — including John Elliott, head of the center. Result: new Wells Fargo warmups and uniforms.

“We were glad to show Travis, his teammates, the league, and community that we support them,” John says. “We’ve had a lot of fun talking about how we now have our own basketball team, and many of us have watched the Triad Trackers play.”

Travis’s biggest passion isn’t found on the basketball court. It’s what happens after practices or between games or at Wells Fargo where he works as a trust administrator on a team that manages 4,000 life insurance policies in 3,000 estate plans.

“My passion is mentoring others with similar disabilities,” says Travis, a member of Wells Fargo’s Diverse Abilities Team Member Network group. “It’s humbling when you have the opportunity to provide advice or recommendations to help someone overcome obstacles related to their disability so they can become independent and mobile again.

“There’s no other feeling like it in the world. It’s the ultimate three-point shot.”