On Feb. 12, the Year of the Ox will begin, and people around the world will celebrate the Lunar New Year with 14 days of festivities. It is a Chinese tradition for families and friends to exchange “lucky money” on special occasions like weddings and during the Lunar New Year.

Crisp bills are placed in bright red envelopes, the luckiest of colors. Gold decorations are typically printed on the envelope with the Chinese characters for great luck and great adventure. Sometimes sketches of the peach and the pine tree are used to represent longevity, while the carp may also be chosen to represent success. More than giving money, gifting a special envelope is a way to share joy and build relationships.

Since 1961, Wells Fargo customers preparing for Lunar New Year have been able to pick up decorated envelopes at their local branch while withdrawing money for gifts. 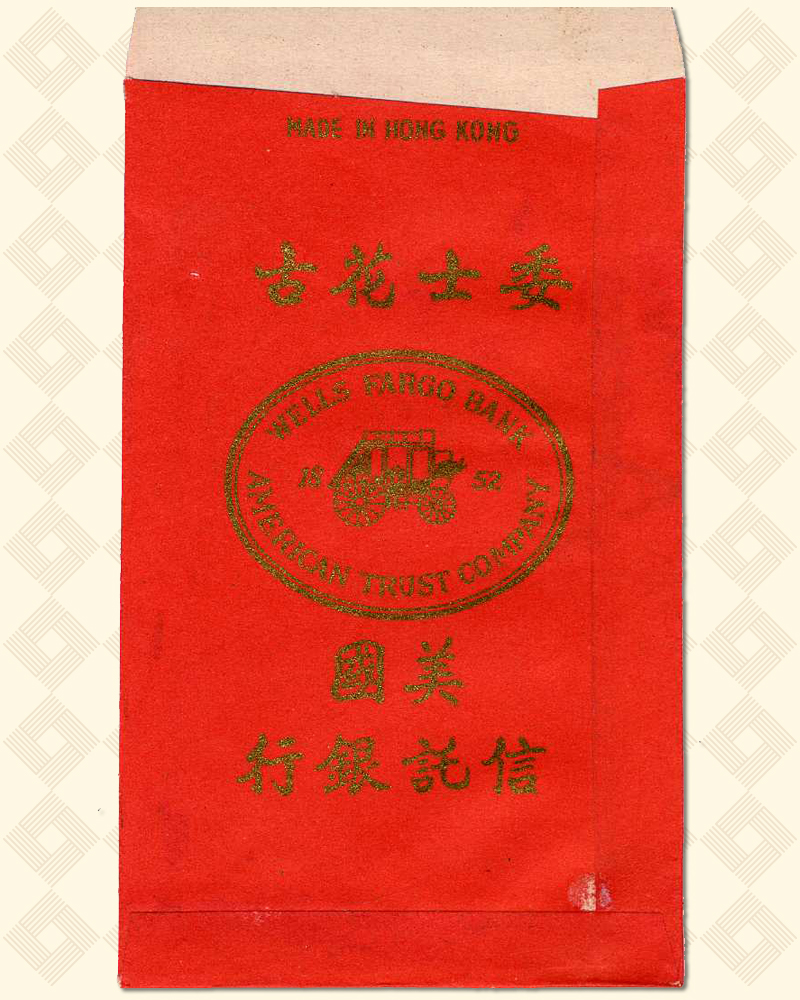 The tradition at Wells Fargo is believed to have started with a banker named Lyman Jang, who understood the importance of Lunar New Year. He was born in 1920 in Courtland, California. His father was a merchant at the Wo Chong Store, which is the only standing building of the once bustling Chinese community along the Sacramento River Delta. At the age of 17, Jang traveled to China to study language for two years at University of Nanking (today Nanjing University).

In 1961, Jang was working as an assistant cashier at Wells Fargo’s Chinese Department, which specialized in services for Chinese-speaking customers in California and abroad. Jang daily used his language skills to help customers conduct business in-language and manage correspondence with banks in Hong Kong. As Lunar New Year approached, he found a way to make the celebration preparations more convenient for Wells Fargo’s customers in Northern California.

Jang bought decorated red envelopes printed with the Wells Fargo logo and sent them to branches in areas with large numbers of Chinese customers. Realizing that some of the bank staff might not understand what he was sending, he sent a letter explaining the importance of lucky money during Lunar New Year, describing it as “an opportunity to create goodwill among our Chinese customers.” The program was an immediate success.

Popular demand caused the branches in Oakland and Sacramento to re-order more envelopes from Jang before Lunar New Year even started. The Wells Fargo branch in Stockton gave out an estimated 3,800 envelopes to customers and noncustomers alike. With a Chinese population of about 2,300 in 1960, that meant there were enough for at least one envelope for every family celebrating the holiday in the Stockton area.

Over the following years, the decorations on the envelopes changed, but customers continued to visit Wells Fargo to get their lucky money envelopes to welcome the new year. Today, this seasonal tradition continues. Customers can get envelopes to share good luck with their friends and family for the coming year at select Wells Fargo branches. 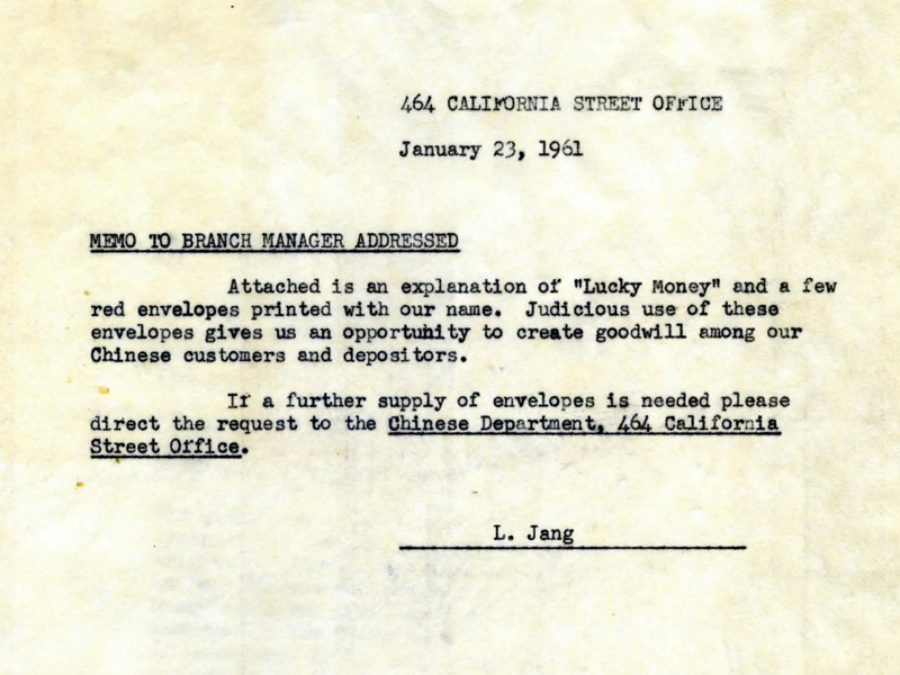 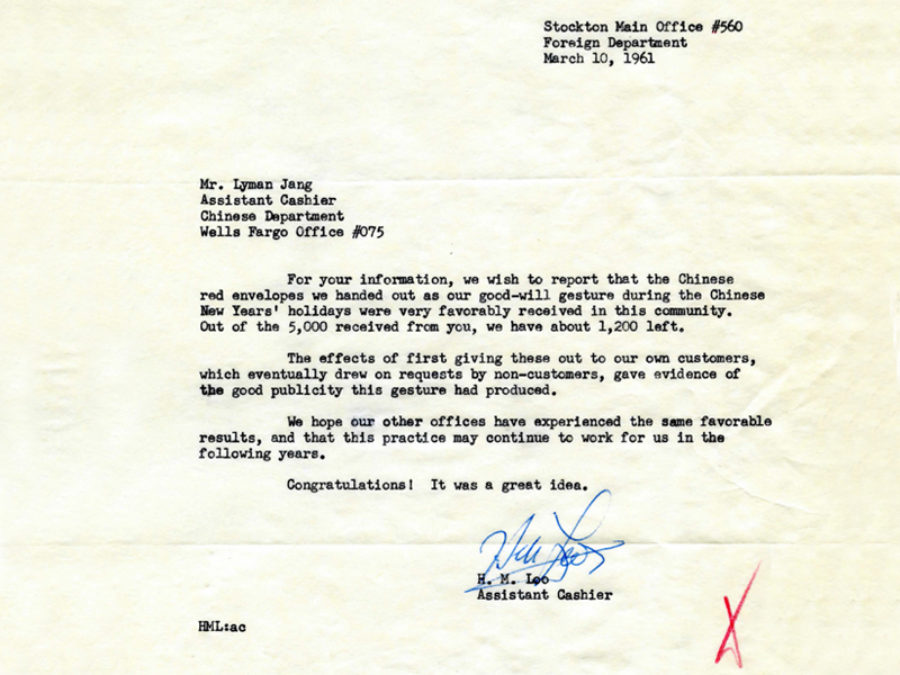 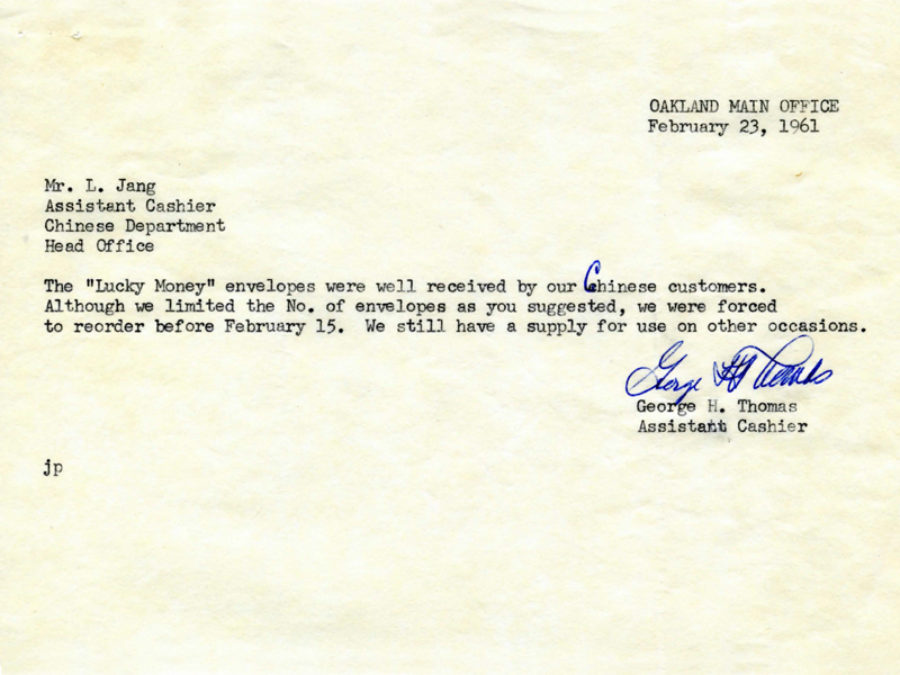 Jang was working at a farm near his hometown of Courtland, California, when World War II began. As America went to war in the 1940s, Jang enlisted in the armed forces with an estimated 18,000 other Chinese and Chinese Americans whose service was recognized with a Congressional Gold Medal in 2018. He served in the U.S. Air Force for two years.

After the war ended, Jang moved to San Francisco and started working at the International Department of the American Trust Company, where he used his study of Chinese to help customers in Chinese communities and abroad. During that time, he also became a naturalized citizen as changes in immigration law provided an avenue for citizenship for American-born children of Chinese immigrants like Jang.

In 1960, Wells Fargo merged with American Trust Company. That same year, Jang was promoted to assistant cashier of the bank’s Chinese Department. Jang moved to the bank’s Broadway-Grant branch in San Francisco’s Chinatown, serving as assistant manager from 1965 to 1971 and manager from 1971 to 1975. While manager, he developed the Chinese translation of the Wells Fargo name that is still used today. He retired in 1975, and lived for several decades in service to his community before passing away in 2005.